Sometimes, when I feel artist’s block and cannot get myself into the studio, I go back to my roots as an artist and create something that feels “safe.”  As a budding artist, I was intrigued by the Art Nouveau movement.  The freeform yet carefully orchestrated whiplash lines typical of this style of art flowed onto my sketch pages so easily, I could picture them encircling my vase forms.  Using a sgraffito technique, I carved through colored slips to reveal the white of the clay body in waves of vines and flowers.  I enjoyed seeing my two-dimensional sketches stretch and grow onto the surfaces of my pottery, gaining new dimension as I borrowed from a classic style and watched it change to become my own.  The decorations on the surface of my pottery soon leapt off the surface and became three-dimensional additions, an evolution seen most clearly in Poppy Vase (below).  I had not done sgraffito in years until I hit an artist’s block recently.  I had not been on the wheel in a while because I had been pregnant, and in the months after having William I was too tired and busy to make any artwork.  But as he became stronger and more independent, it became clear that I would now be able to create again…but I had no inspiration.  I attribute some of my apathy to post-partum blues, and the thought of sitting at the wheel would only remind me of the void in my body making it possible again.  So I looked back through some old work, found some of my Nouveau-inspired pieces, and set about to create a piece whose size represented the physical and emotional weight of the pregnancy, and whose surface design would take me back to those carefree days of sgraffito.  Throwing the piece in sections, I created a floor pot so large I literally had to embrace it at times.  Completing this piece truly felt like a weight lifting off my shoulders, the burden of a blank mind and empty womb replaced with the permanence and satisfaction of having created something tangible that will bring us so much joy. 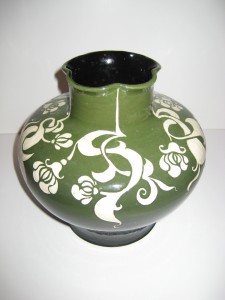 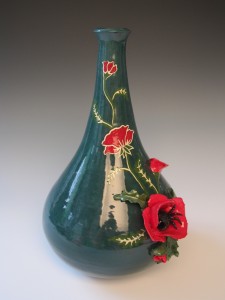 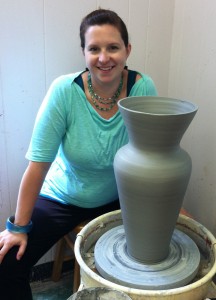